After the Titanic sunk in 1914, nations of the world required ships at sea to maintain a mandatory safety watch on certain radio frequencies in the event of emergency or distress. The Silence Periods took place four times an hour, twice each for voice and Morse code.

Just as Morse code was fading in the mid-1990s, the American Radio Relay League proposed the Wilderness Protocol as a way for hikers and campers to call for help in remote areas before mobile cell phone coverage became ubiquitous.

The idea is good, but, as Bob Witte writes, “overly complex for practical use.”

On a recent hike of the Shabbona Trail here in Illinois, I gave the Wilderness Protocol a try. Rather than listen at specific times, as the ARRL recommends, I maintained a continuous watch on 52.525 MHz, 146.52 MHz, 223.5 MHz, and 446.0 MHz.

Before my hike, I announced on the Illinois Ham email reflector when I would be hiking and where I would have my radio tuned. I admitted my low power radio would make simplex communication difficult, but asked people to call me anyway.

I worked four stations using the Morris repeaters but no one on the Wilderness Protocol simplex frequencies during my six hour hike.

I called CQ at the top and bottom of the hour on 52.525 MHz and 146.52 MHz, the two frequencies with the best chance of a band opening during the morning hours.

Either no one heard me, or no one was monitoring.

David Coursey has a practical critique of the protocol that I agree with.

If we promote ham radio as an emergency resource, it must be a dependable resouce, no disappointment of the public or fellow hams allowed. Especially when lives are at stake.

And if lives are really at stake, buy a SPOT or similar device and everyone — you, friends, family, even me — will sleep more soundly knowing you aren’t depending on ham help that is unlikely to be there when needed.

My dad earned his amateur radio license in 1950 when he was 10 years old. His first station consisted of a Collins transmitter and receiver into a long wire antenna. From the QSL cards that survived, he worked the world with those radios. The hobby led him to being a radioman in the US Navy after high school.

During a recent trip home, I took possession of what is left of dad’s radio station, the one I remember as a small boy. 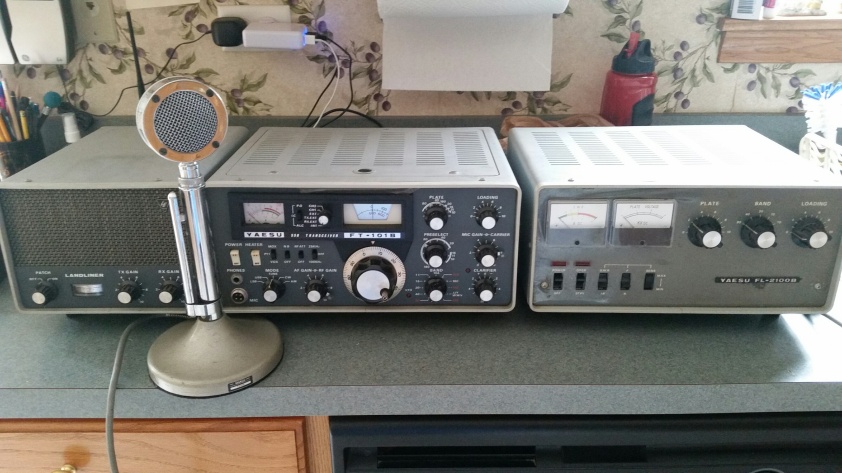 Now I am stepping back in time to see if I can get the station back on the air. There has been no power applied to anything since the late 1980s. The electrolytic capacitors probably are dry as bone. The tubes probably are tender too and will require a lot of TLC and a variac to get them going again.

This is one rugged radio. Without an amplifier, it will drive 260 watts sideband voice, 180 watts Morse code, and 80 watts AM voice. I’ll have to re-learn how to tune this radio because nothing on the market today works the way these radios did. 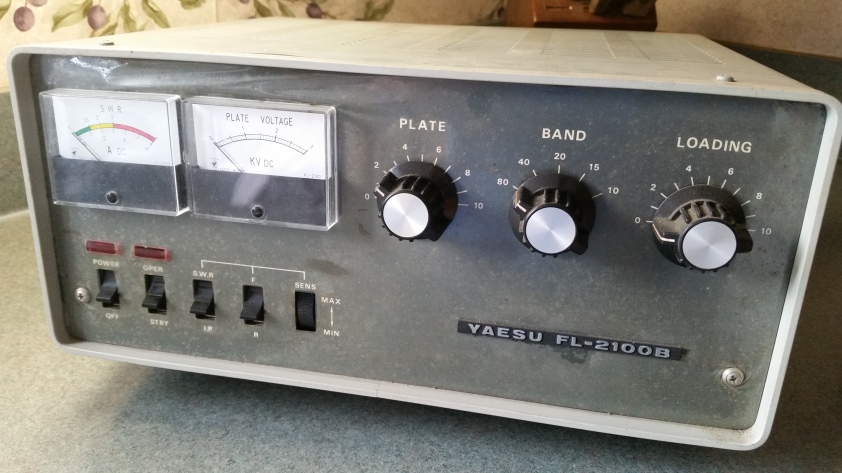 Probably an illegal power amplifier today only because it will operate on Citizens Band. For legal Amateur Radio use, it’s a 1,200 watt linear amplifier. It will generate 800 watts AM voice. Beast Mode. 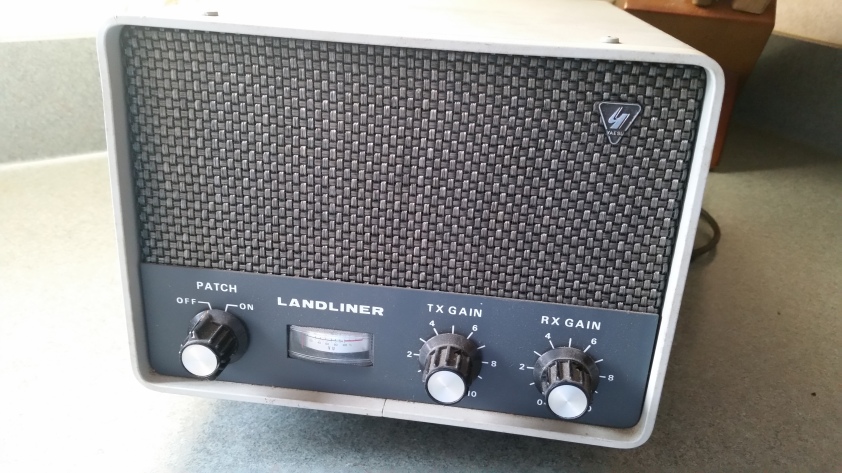 Before satellite carried phone conversations across the oceans, there was the phone patch. My dad used this one to connect soldiers in Vietnam to their families back state-side. A friend wondered how many guys talked to their loved ones for the final time across this radio. 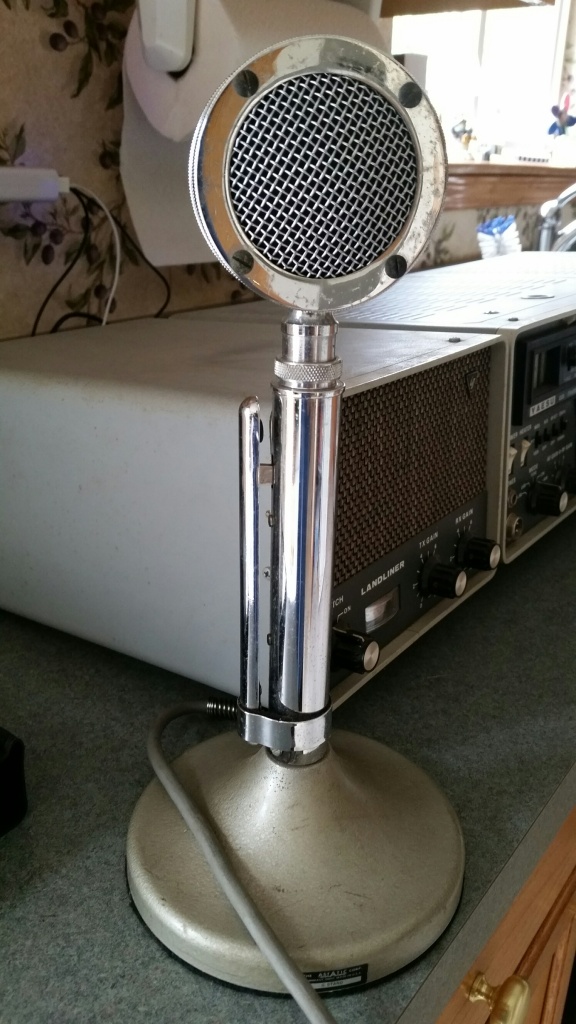 I just love this microphone. It’s nickname is the Lollipop, for obvious reasons.

My longest hike of the season so far has been the 16 mile Shabbona Trail between Channahon and Morris, Illinois.

The Shabbona Trail is in the heart of the 61-mile long Illinois & Michigan Canal National Heritage Corridor.

The Chief Shabbona Historial Trail was established on July 30, 1960 by Boy Scout Troop 25. The trail is nationally approved by the Boy Scouts of American and follows the paths that Shabbona was known to have walked. By 1963, over 10,000 scouts hiked the trail. Along the trail, you will see full-sized replicas of canal boats, locktender’s house, working stone locks, and fully restored stone aqueducts.

The habitat ranges from open prairie grasslands to dense woods. The Illinois River provides panoramic views in many areas. The trail is shaded in most areas by a variety of trees including walnut, oak, ash, maple, sycamore, hawthorn and cottonwood. You also see beaver, muskrat, mink, raccoon and deer from time to time.

The Channahon State Park is the official trailhead of the Illinois & Michigan Canal State Trail. It became a state park in 1932, one year before the canal officially closed. During the Great Depression, the Civilian Conservation Corp restored Lock 6, Lock 7 and the Locktender’s House. 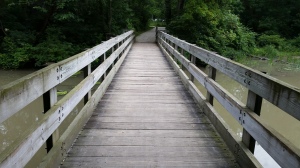 McKinley Woods is a 525-acre preserve operated by the Forest Preserve District of Will County. It is a diverse habitat of forest, prairie, wetland and riverfront. It is a favorite site for bird watchers, kayakers, and geocaching enthusiasts. 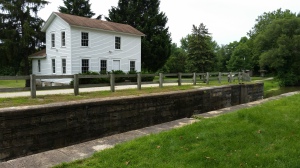 The Dresden Lock is one of the most impressive man-made features along the Shabbona Trail. Listed on the National Register of Historic Places, the lock and dam complex includes an arced gravity dam, a spillway, nine Tainter gates, 18 headgates, and a section of fill dirt connecting the headgates to the embankment of the canal. 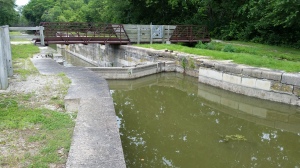 The Illinois Department of Natural Resources maintains a primitive camping ground for approximately five tents. There is water and restroom facilities within walking distance.

Shabbona was a member of the Ottawa tribe before he became a chief within the Potawatomi in the 19th century. He died in Morris in 1859 at the age of 84. This granite boulder was placed on his gravesite in Evergreen Cemetary in 1903. 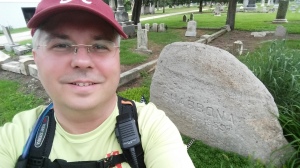 Named after an Illinois governor, the William Stratton State Park was developed in 1959 as a boat access to the Illinois river.

This may be the only time I get to see this aqueduct. Originally built in 1847, the state intends to demolish and remove both the bridge and aqueduct after a flood seriously damaged the site in 2012.  I wasn’t able to get a good photo because the place is a real mess.

Because the Nettle Creek Aqueduct was destroyed, I could not make it to Gebhard Woods.

The park belonged to the Grundy County Rod and Gun club, who purchased the land from the Gebhard family in 1934 for $1,500. The Rod and Gun Club developed a fish rearing pool on the property before donating the land to the state a few years later.

I really respect the Chinese students I encounter in grad school. Thousands of miles from home and struggling to grasp the crazy way we use the Queen’s English here in the States.

This little tool is one way they cope. I call it the Bumblebee.

When someone says a word a Chinese student doesn’t understand, she types it into the Bumblebee. The software grabs information from across the Chinese-language internet and gives her a quick explanation as to what the Hell we just said.

It’s a product of dict.cn, another go-to tool for ex-pat Mandarin speakers.

I had lunch with a friend’s son recently. Like most recent college graduates, he is actively searching for his first real job.

Since we both have degrees in Economics, he was looking for advice. Unlike accounting majors, jobs for econ majors don’t stick out. There are no “Staff Economists” or “Junior Economic Analyst I” job titles, unless you want to work for the Federal Reserve. But there are jobs out there for people with solid skills in statistics and math.

During the course of our conversation, I could almost hear myself talking to the younger me with the lessons many of us learn during our careers.

You have a mafia. It’s your alumni association. They can help you with introductions and career advice simply because you share a common bond.

If you pledged Greek, you have another mafia that can help.

Cultivate those connections. Use them and then give back. That is how it works.

Have a Long-Term Goal and a Plan to Get There

You have a passion. It may not be what you will do in your first post-college job, but you have one.

My ideal job would be in Humanitarian Relief, working to help those in crisis caused by man or nature. What skills do I need? How can I get there?

Develop your passion. Nurture it. Learn what it takes to get there, pick up the skills necessary to get there, and work towards that goal.

Consider the Quality of Life You Want to Have

How are you spending time with the people who will cry at your funeral?

Identify Your Weaknesses and Improve Them

In the next decade, people who will do best in the workforce will have two skills.

They will be good in statistical analysis, and they will know how to write code.

My weakness today is a lack of coding skills. I learned BASIC, Pascal, FORTRAN and C++. Not much use for those today (except C++), so I am learning Python.

What skills will you need to have the career you want?

Build Your Personal Board of Directors

I think the advice holds up. What would you tell the younger you?